Who is Patrick Heath? 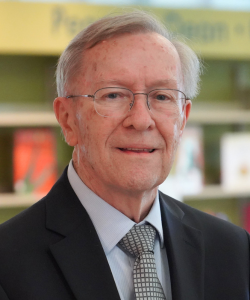 Patrick Heath, former mayor of Boerne, Texas for 20 years, has had a long and illustrious career advocating and legislating for libraries, Texas libraries in particular. Patrick is a respected and active library supporter in local, state and national library circles.

In Texas, Mr. Heath has been even more active. As a member of the Texas Library Association, he has participated in TLA Legislative Days, and he spent several terms on the TLA Legislative Committee. He is the founding president of the Friends of Libraries and Archives of Texas. From 1993 to 1999, Heath served as a member of the Texas State Library and Archives Commission. He has also served as a mentor for the Tall Texans program. He was previously a board member of Library Partners, Inc., a non-profit organization established to help Texas public libraries identify ways of developing non-traditional funding sources. In support of his many efforts, he received an Outstanding Services to Libraries award from the Texas Library Association in 1995. Mr. Heath served as the 2009 to 2010 President of the Texas Library Association.

Patrick's Role in the New Library

Heath's support of a bond committee and subsequent successful bond election in 2007 helped bring about a 30,000 square foot new library, certified in Leadership in Energy and Environmental Design, which opened its doors in June of 2011.

Although Patrick Heath and his wife, Carla, have moved to the Dallas area to be close to family, they continue to maintain a strong attachment to this library and community. Heath's influence is far reaching, he is well respected and admired, and his insight and perseverance have proved invaluable to the Boerne Public Library (and now the Patrick Heath Public Library) over the past 30 years. His labor on behalf of all libraries have been tireless, and his singular efforts on the state level have moved Texas libraries to a superior standing.