The native-stone (limestone and rock) building with "gingerbread" embellishments had already lived several lives. When it was built circa 1884, the building served as a general store / residence for Joseph and Ida Dienger and their seven children. The store sold staples such as flour, cornmeal, sugar, coffee, beans, dried peas, and potatoes.

An extension was added in 1900 to house a dry-goods store, run by Joseph's sisters Lina and Louise. Here, fabrics, shoes, linens, and ready-to-wear garments were sold.

Around 1912, Joseph and his sisters sold their stores to brother Charles. As time passed, other members of the Dienger family owned and operated the stores. 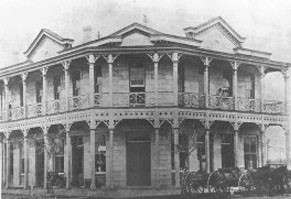 In 1967, the building was purchased by nine Boerne businessmen (Adrian White, Verne Powell, R. M. George, Dr. Roger Hestilow, Mayor Arleigh Huff, Arley Sueltenfuss, Edgar Bergmann, Richard Leeder, and Harry Davis). Builder R. M. George converted the building into a pioneer-style restaurant called Antlers, named so for Joseph Dienger's collection of 2,000 deer and moose antlers, found in the basement. Antlers, occupying the bottom floor of the building, was a public restaurant serving Hill Country cuisine. On the top floor, a private supper club / bar called the Trophy Room was opened. The north part of the Dienger Building was rented to the Rodriguez family and was used as a grocery store.

In 1978, Antlers closed and the First National Bank of Boerne bought the building the next year. In 1980 William and Paige Ramsey-Palmer bought the Dienger and renovated it into office space for geologists. When Bill Ramsey-Palmer died, J. W. Smith bought the Dienger and used it for office space. When the city purchased the property in 1989 for $550,000, it had to be remodeled again, at the cost of $165,000, to meet the needs of a public library. The money was raised through donations and certificates of obligation. Since the Dienger is listed on the National Register of Historic Places and has been designated a Texas Historic Landmark, the city sought to preserve the building's architectural integrity.

After the remodeling was finished, the Dienger was dedicated as the new home of the 7,700 square-foot Boerne Public Library on June 2, 1991. Library Director Mary Brady retired after 10 years and Louise Foster was hired. By the end of the 1990s, the library owned 33,000 volumes; in 1998, the number of check-outs was 88,000 (Garland A. Perry, Historic Images). In 2001, Louise Foster accepted a position in New Braunfels and was replaced by Joe Gunter; in 2003, Kelly Skovbjerg became Boerne Public Library's director.