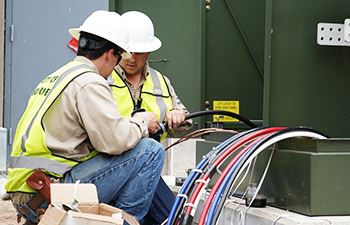 The City of Boerne purchases its electricity primarily from CPS Energy. The electricity is delivered to the City via wires and two substations owned by the Lower Colorado River Authority (LCRA) – each shared by the distribution utilities of the City of Boerne and Bandera Electric Cooperative. Both substations are in the city limits at the intersection of Adler Road and Plant Street and near the south IH-10 interchange.

Electric power is delivered to each substation at 138 Kilovolts (kV) and is converted to 7,200 volts. The City-owned primary power lines carry the 7,200 volts to transformers within a distribution system that converts the voltage to lower levels (120V-480V) that meet our customers’ electric power requirements.

Refer to the full Distributed Generation Ordinance for more information. See exhibit A of the ordinance for the application and exhibit B for the agreement for interconnection.