Roeder Park is a quiet, peaceful retreat to those who visit, offering a comfortable open green space. Its centerpiece is a small gravel walkway leading to a bench and a WWII memorial in honor of the Boerne-area men who died in service.

Roeder Park is designated as a neighborhood park and serves the needs of the local residents. The residents that surround the park have asked that it remain a simple green space without amenities.

On June 18, 1945, C.T. and Eva Roberts deeded four lots in the Cibolo Park Addition to the City of Boerne in order to honor the memory of Aaron and Allen Roeder, their twin sons who were killed in World War II while serving their country. Click on the tab below to read their story. 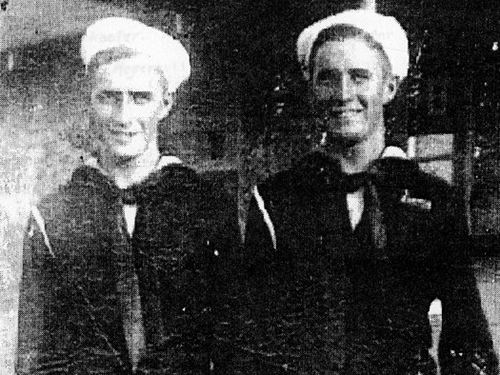 Allen and Aaron (pictured left to right in Navy uniforms) graduated from Boerne High School in 1944 and joined the Navy together. The pair were assigned to the USS Bismarck Sea, a mid-sized carrier ship converted from a cruiser. Aaron was placed in the aft anti-aircraft gun tubs and Allen was placed as the forward gunner’s mate. The newly commissioned USS Bismarck Sea saw action at Luzon, Leyte, and two Iwo Jima campaigns.

On the evening of Feb. 21, 1944, the Bismarck Sea had just recovered her aircraft from a strike when a swarm of Japanese planes appeared. The crew downed one enemy bomber, but another one crashed into the ship abeam of the after elevator. The crash knocked four torpedoes on to the hangar deck, parted the elevator cables, and damaged the after fire main. The fire appeared controllable until its glow attracted a second Japanese plane, which also crashed just forward of the elevator well, killing or mortally wounding the entire fire fighting party.

This explosion buckled bulkheads and collapsed the decks in the ammunition clipping rooms, adding fuel to the fire. The planes on the hangar deck also added gasoline to the fire. Soon, the flames raged out of control and a variety of ordnance began to explode. It was in this area of the ship that Aaron was stationed and is believed to have been killed.

Wounded by shrapnel, Allen was moved midship with the rest of the crew, who were preparing to abandon ship at the captain’s orders. Before he could be stopped by his fellow crew, Allen ran back to find Aaron. He was last seen heading into the smoke and flames, trying to rescue his brother. The USS Bismarck Sea sank to bottom of the Pacific Ocean in less than 90 minutes. 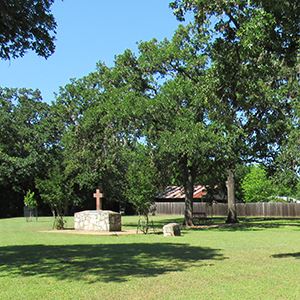