Boerne City Park is a unique natural setting bordered on one side by Cibolo Creek, which boasts some of the most magnificent cypress-lined banks along the waterway. The park is the largest in Boerne and is home to trails, open space, sports fields, tennis courts and more.

The park has several paved, ADA-accessible trails that connect to and run through the park. The scenic Cibolo Trail runs 1.75 miles from the park all the way to Main Plaza in downtown Boerne. City Park is also situated next to the Cibolo Center for Conservation with trails connecting the two points. Once at the center, you can explore six miles of trails and learn about conservation.

The 125 acres of land that became City Park, and Boerne’s first park, was purchased in 1965 with help from a federal grant. Park planners envisioned amenities like athletics fields, picnic and camping areas, playgrounds, recreation buildings, and tennis courts. The City’s first Recreation Committee was organized in 1969 to work on a maser plan for the park.

Boerne City Park hosts recreational and competitive sports leagues and tournaments. Click on the tabs below to learn about the athletic offerings at the park.

City Park has five soccer fields for league play and for rentals. There are two adult (full-sized) fields and three youth fields. All are available for rent by the hour or the day for tournament play. Field 4 is a public field and is available on a first-come, first-served basis unless it is being used for league play or is rented.

Hourly rental fees for adult and youth fields are $20 per hour for City of Boerne residents and $40 per hour for non-residents. Lights are included in the fee and will be set up as needed. Click here for tournament rental information.

The Municipal Pool is located by City Park. The pool is host to aquatic activities for all ages, including lessons, lap swim, pool parties and more. Learn more about the Municipal Pool. 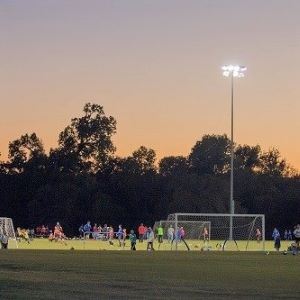