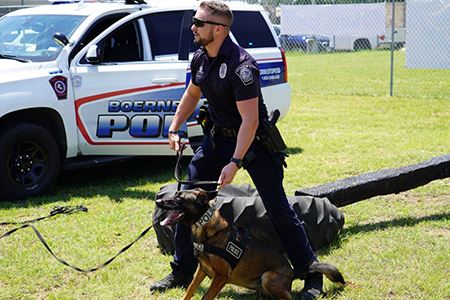 About the K-9 Detail

The Boerne Police Department’s K-9 Detail has two K-9 units which are trained to respond to missing persons, track criminals, conduct building searches, detect narcotics, and protect their handlers if needed. Both units were purchased and trained at Pacesetters K-9 in Liberty Hill, Texas.

The K-9 Units responded to nearly 200 requests for deployment in 2020 from Boerne Police officers, as well as state and county partner agencies, resulting in 70 arrests. The detail conducts K-9 handling demonstrations for local community groups, educational institutions, and other organizations throughout the year.

Senior Officer Pedro Moncada is the handler for K-9 Tucker, a female Belgian Malinois that joined the department in 2017. Senior Officer Moncada and Tucker spend countless hours training in group settings and independently, even on their days off. Their work has led to the seizures of firearms and harmful narcotics such as methamphetamine, cocaine, and heroin.

Cpl. Brandon Goudreau is the handler for K-9 Emma, a Belgian Malinois and German Shepherd mix that joined the department in 2019. K-9 Emma is a dual-purpose patrol dog trained in criminal apprehension, tracking, and narcotics detection. The team of Cpl. Goudreau and Emma have been deployed to numerous calls resulting in the seizure of narcotics and firearms. The pair trains on a consistent basis to keep their skills sharp.

The Boerne Police Department is home to a K-9 Training Facility available to law enforcement agencies throughout the state and beyond. The facility features a kennel space, K-9 washing station and a large, fenced training area. The K-9 Training Facility is home to training events and competitions and is designed to be a landmark training site for the region. The facility is the result of a partnership with the department and local Boy Scouts. Read more about the partnership.