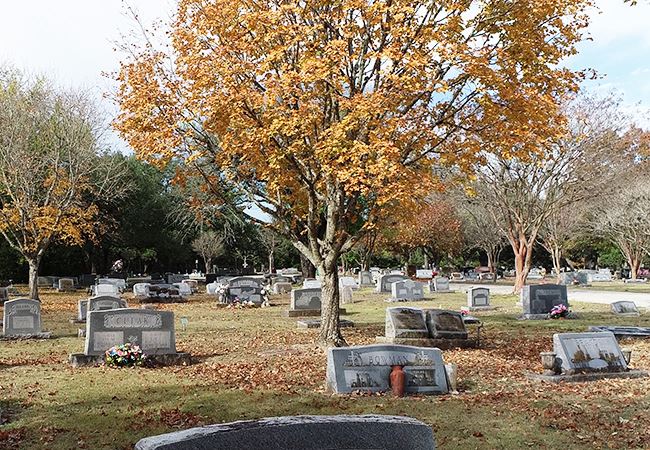 According to Boerne City Council meeting minutes from October 7, 1867, Adam Vogt, for the sum of $1, deeded to the City one acre and 4.357 varas of land on the San Antonio-Fredericksburg Road (now School Street) to be used as a cemetery.

On January 28, 1867, a notice was sent to the community members who had committed themselves to pay $2 for a space 9 feet by 4.5 feet for reserved family graves. It stated that they must pay this money by the end of April 1867 so that the land could be surveyed and fenced. The City has added land to the original cemetery from time to time as needed.

Sections One and Two

The oldest parts of the cemetery are in sections one and two. There is a row of graves in the center of these sections that faces toward the middle. In section two, there is a row that is marked Pauper Row. Many of the inscriptions on these older graves are in German.

The Boerne Cemetery houses a number of graves of historical Boerne figures. Researchers find the cemetery an excellent source of historical information. The following are some of the most recognized graves in the cemetery. The letters next to the names correspond to the map of the old section.

There are over 335 veterans buried in the cemetery. In their honor, the Veterans of Foreign Wars in Boerne holds a ceremony on Memorial Day and places an American flag on each veteran's grave.

Section SE II, Lot 21, Of French and German descendants, her parents came to Texas in the early 1840's. She was reported to be the first white girl born in Boerne. In 1896 she established the Becker House Hotel located on the southeast corner of Main and Rosewood.

Section SE II, Lot 68, Eldest son of Julius Phillip, he died at age 31 from wounds received somewhere in France during WWI. The Boerne V.F.W. Post was named Bruno Phillip Post in his honor.

Section SE II, Lot 83, Born in Kreutzberg, the oldest son of Julius Paul Phillip. He served as Kendall County Judge for 10 years and also held several other County offices. He loved music, played the violin, and played a horn in the Boerne Brass Band. His father erected the original crass at Kreutzberg.

Rock Wall Section SEI, Block 005, Lot 130, Born in New York, he played an important part in early history of Boerne. A local dentist, he kept an office in London to recruit British to come to Boerne. Some of the English who came at the time were the Calrows, Gilliats, Grogans, Howard, Hughes, Clarks, Grays, Guthries, Kings, Johns, Molesworths, Taylors, Wilkins, Perrins, Oughtons, Uphams, Whitworths, and Stephensons. He also dealt in real estate.

Section SEI, Lots 2 to 5. Earliest recorded graves in the cemetery. John Bickel, Catherine Bickel, H. Spangenberg and Baby Spangenberg. Killed in Indian massacre in 1868. Henry Bickel was 12 at the time of massacre and escaped to the neighboring Zoeller farm. He was buried in 1917.

Section SEI, Lot 009. One of the oldest graves in cemetery. Family replaced original marker which indicated death in 1862 with new marker indicating death in 1869.

Section NEI, Lot 91, Plot 13. Born in Germany, he arrived at Indianola in December 1845. After living in Fredericksburg and Luckenbach, he moved to Boerne in 1883 to be near his children. His home on Main Street still stands.

Section SEI, Lot 0112. Immigrated from Hungary, he was an author and a Lieutenant Colonel In the U.S. Army during the Civil War. His grave was unmarked for 93 years before the local V.F.W and Masonic Lodge formally recognized and marked it in 1987.

Section NWI, Lot 13, Plot 004. A wealthy educated German immigrant who was a founder of Tusculum. He built several homes and building in Boerne. He played an important part in the development of Boerne through his financing of additional housing and commercial structures.

Section NWI, Lot 34, Plot B. Born in Mississippi, he was one of two doctors in Boerne at the turn of the century. He was the second Mayor of Boerne between 1911 and 1915 while carrying on his medical practice during the times of severe flu epidemics.

Section SWI, Lot 66, Plot 003. Was 8 years old when his family immigrated to Texas from Germany in 1848. He was a successful farmer, businessman, postmaster at Welfare, Justice of the Peace, Kendall County commissioner and Tax Assessor.

Rock Wall Section SEI, Block 004, Lot 101. Immigrated from German, operated the first business in Boerne - a saw mill and grist mill. He signed the petition to organize Kendall County and also served as County Judge. His son was also a leader in Boerne, and his grandson, Clarence, served the city as mayor.

Rock Wall Section SWI, Block 3, Lot ?. Immigrated from Germany, was the first school teacher Boerne. He organized the Boerne Village Band and the Boerne Gesang Verein in 1860 and was director of the group for many years. He was involved in the cultural development of Boerne through music.

Rock Wall Section SWI, Block 002, Lot 54. Immigrated from Prussia in 1852, landed at Indianola, lost everything to Indians and during the Civil War came to Boerne and made a name for himself as Kendall County Tax Assessor.

Rock Wall Section SWI, Block 002, Lot 034. One of the first settlers to Boerne, he was a well-to-do farmer who immigrated from Germany in 1852. He served the Confederacy as a ranger on the Texas frontier in 1861 to 1864.

Rock Wall Section SWI, Block 002, Lot 031. Immigrated from Germany in 1853, he first settled in Sisterdale then moved to Boerne where he established one of the first general stores next to his residence. He established a campground area behind the store where people coming to town could camp and water their horses and a dance hall for socializing. One of the originators of the Boerne cemetery, his descendants still live in Boerne.

Rock Wall Section NWI, Block 1, Lot 013. Born in Ireland, signer of petition to create Kendall County, was a District Clerk, and served as Boerne's second postmaster from 1861 to 1869.

Rock Wall Section NWI, Block 001, Lot 001. Noted journalist for whom Kendall County was named. Introduced wool bearing sheep from Europe, built original Saint Peter's Catholic Church in 1860 for his wife. A Texas Historical Marker has been placed at his grave.

Section SEIII, Lot 418. Born in Boerne, his parents came from Germany in 1850. Lived on Main Street and was a master cabinet maker. Trademark "Ringtail Rino" now sought after by collectors.

Section FS5, Block 025, Lot 001. Born in North Carolina, he was an outstanding physician who performed surgery in homes and delivered more babies than anyone in the history of the area.